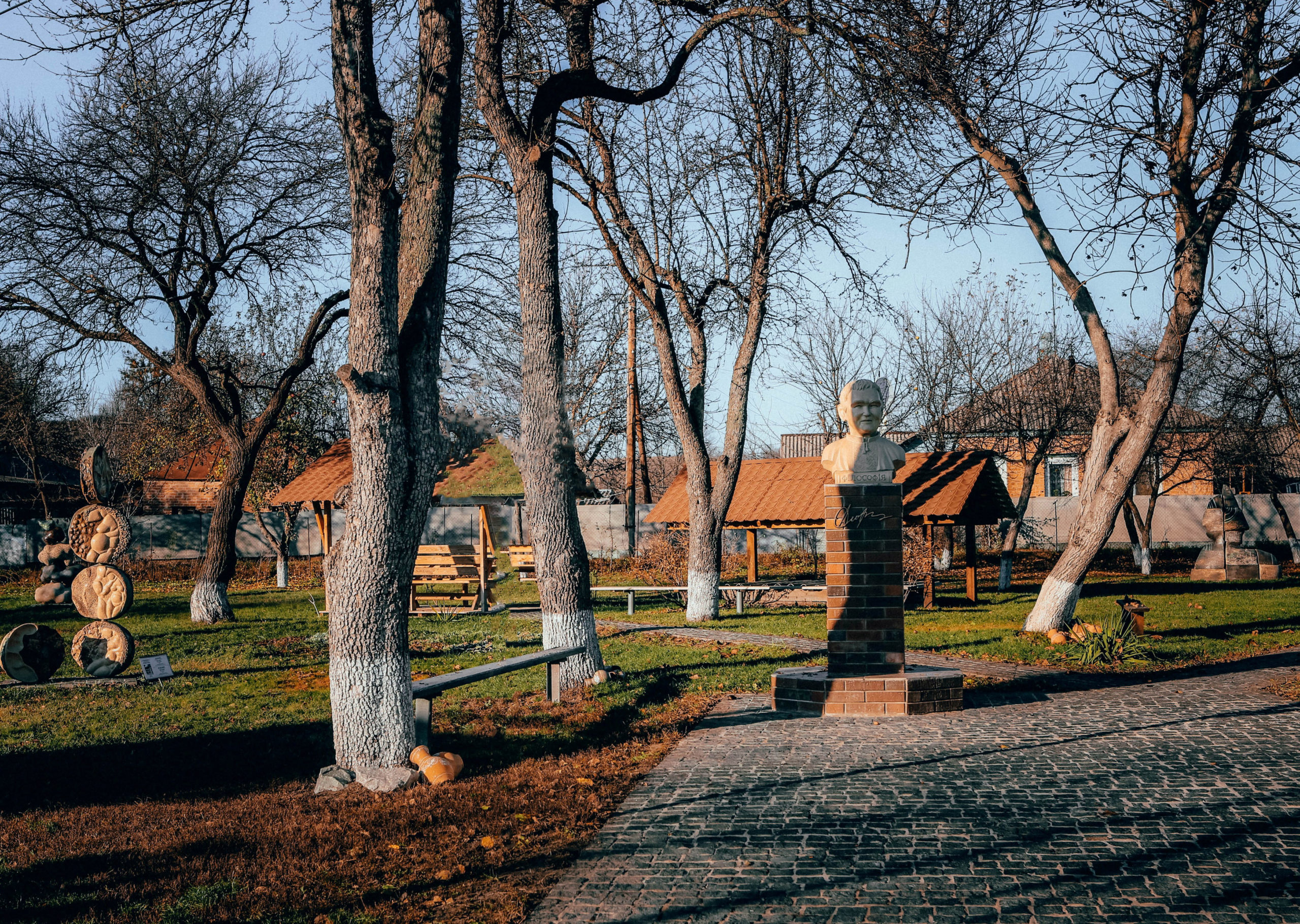 The Memorial Estate Museum of Leonid Smorzh, a philosopher and a collector of Opishne ceramics was opened July 1, 2010 as one of the units of the National Museum of Ukrainian Pottery in Opishne.

This is the first memorial estate museum of a Ukrainian philosopher, where all the personal things of an outstanding scientist, collection of folk art works, icon painting, pictures, gathered by him, have been completely preserved.

Leonid Smorzh (07.11.1927 – 21.07.2009) was an outstanding Ukrainian scientist, a philosopher, ceramologist, a collector of antiquities, Doctor of Philosophy, Professor. He became familiar with the cognition of pottery craft secrets still in his early childhood, because was born near Opishne, in the village of Ordanivka of the Dykanka District (Poltava Region). Later the family moved to the pottery town itself, and since 1934 lived permanently in the neighbouring Miski Mlyny, where many potters resided too, in particular the glorious maestro – Ostap Nochovnyk (1853–1913).

The Second World War changed the destiny of the youngster just like of many persons of the same age. Since his 15 years Leonid Smorzh fought at the fronts of the German-Soviet war. For his courage and heroism he was awarded with many decorations, including the Order of Glory.

Shortly before the end of the war Leonid Smorzh was sent to the school of navy in the air. Later he served in the Black Sea and Baltic Fleets. He was demobilized in 1950. After a year, the youth has won the Ukrainian champion title from kettlebell lifting on the Republican contest from weightlifting. Due to this successful performance, he was accepted for studying to the School of Trainers of the Kyiv High School of Physical Culture (1951–1953).

Later he was a student of the philosophy department of the Kyiv State Taras Shevchenko University (1953–1958). He completed his postgraduate study at the same university (1964). After a year he defended the Candidate’s dissertation An Aesthetic Ideal in Cinematography in speciality «Aesthetics».

During 1964–1997, he worked in the Kyiv State Pedagogical Aleksey Gorky High School (now the Kyiv National Pedagogical Mykhaylo Drahomanov University) as a lecturer, senior teacher, associate professor, and professor. In 1981 he defended his Doctor’s dissertation in speciality «Ethics and aesthetics».

He worked as a professor of the Kyiv International University of Linguistics and Law (1997–2008), the head, a leading scientific assistant of the Department of Modern Ceramology of the Ceramology Institute – the branch of the Ethnology Institute of The National Academy of Sciences of Ukraine (2007–2009).

He was the author of the monographs: The World of Ten Muses: Art and Reality (1973), Orpheus in the Age of Spacecrafts (Art in the Spiritual Life of the Modern Man) (1989), A Person and Society (A Philosophical and Psychological Dimension) (2001), A Potter’s Daughter (Possessed by CERAMICS) (2004); tutorials Philosophy (2004), Aesthetics (2005); ceramological published works in the periodicals.

In one of his articles the scientist declared prophetically: «Opishne must become the distinctive reserve of folk arts – and not only ceramics, but embroidery and carpet-making (1968). During the 1960s – the 1990s, Leonid Smorzh supported Opishne potters in every possible way, defended them from bureaucrat self-will, popularized the original creative work of the artists, petitioned before different state and public organizations about the founding of the Museum of Pottery in Opishne.

In his memoirs he wrote: «The longterm communication with potters… has convinced me, that some of them on their cultural level and stand in life, values, which they are guided by and consolidated, are above those, who is more educated or has a scientific degree…».

Without virtuous energies of many years, the national centre of keeping and studying of the pottery heritage of Ukraine could, probably, never arise in the pottery capital.

Inter vivos Leonid Smorzh has formed the unique collection of antiquities, the foundations of which the works of the Opishne potters have laid down.

In summer 2009, shortly before his departure into eternity, the scientist presented his collection to the National Museum of Ukrainian Pottery in Opishne.

The scientist gathered his collection during all his life. Many works exist only in a single copy, since have been custombuilt. Besides ceramics, a great deal of embroidered Ukrainian male and female shirts, towels, and tablecloths formed a part of the collection.

About hundred Easter eggs, collected by the scientist in different regions of Ukraine, strike with bright scale and rich symbolism.

Leonid Smorzh was keen also on the collecting of icon painting works. The most pictorial canvases, which have been a part of the estate museum exposition, are the copies of paintings of famous painters, fulfilled by the owner of the collection. Other canvases have been given to Leonid Smorzh by famous Ukrainian artists.

At his leisure time he painted in oil, produced clay figurines, wrote lyrics.

Personal things of the collector, represented in the exposition of the estate museum, reflect tastes and likings of their owner.

The big amount of different photographs indicates the Leonid Smorzh’s passion for art photography and cinematographic art. He covered much ground, associated with interesting people as well.

There is kept the private library of the scientist in the estate museum, which contains about 3000 books, among them are rare editions.