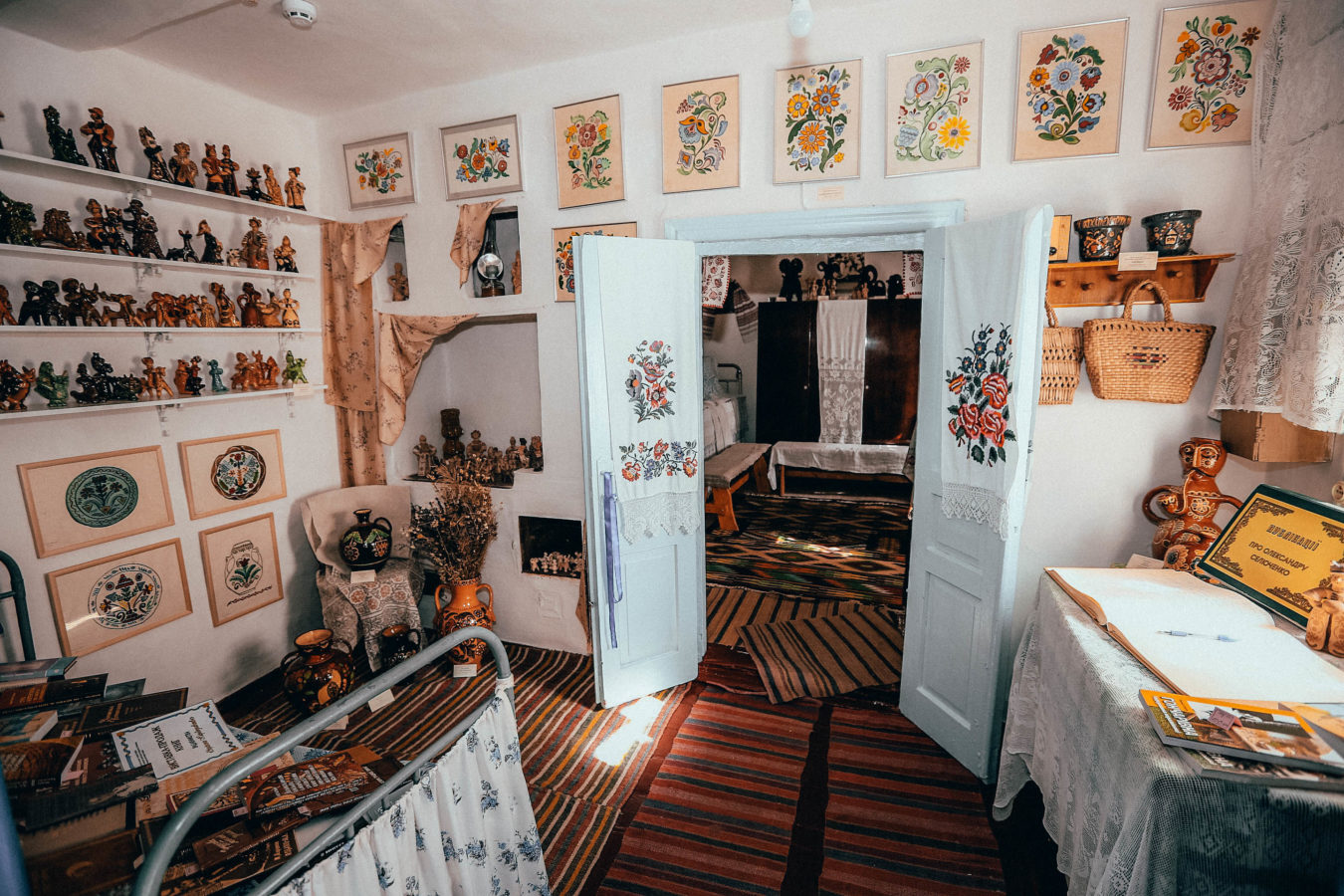 The outstanding potteress Oleksandra Selyuchenko was born May 6, 1921 in Opishne in a pottery family. Since her six years she was already able to produce clay toys. She modeled them together with her mother and brother, and the father burned them. She did that, what her gift and fantasy prompted. She lost early her relatives: in 1933 during the surgical operation her brother has died; in 1947 – her father; in January 1953 her mother, the nearest and the dearest person, adviser, has died after a long illness.

After the seven-year school in 1937, she studied in the twoyear Opishne School of Art Ceramics Masters. In 1939, according to the assignment to a job, she arrived to work in the village of Orikhiv in the Zaporizhzhya Region. During 1943–1946, she worked on one of the mines in the Donets Basin. However the inexorable destiny made her over again come back to the native town. She worked as a sculptor at the «Art Ceramic» plant till her retirement. At home she does not give up her lifework: to the last days of her life she modeled clay toys with love, calling them her little children … «I like clay over all, go to bed with her and get up with her», – spoke the famous artist Oleksandra.

She was a matchless master of clay toys. When she began to model, clay quickened under her skillful hands, and everything around as if stood still, waiting for the birth of a new wonder. Making one figurine, she imagined already another one in her mind; having put on the table the finished article, she started to model the second one, the third one, the fourth one… And this process had no end, there were no repetitions, everything was immediately being incarnated in a perfected and complete form. It was not just a modeling, but a covert act, a magic.

There is a big number of figurines among her masterpieces: different bighorned rams, birds with decorative combs and fantails, mews with two nestlings on their wings, funny horses, red-chested cocks, kind lions, cunning foxes, he-goats and many other animals. Identical forms or decoration cannot be found among them. The master modeled without embarrassment, free, easily, that could be the evidence of the very vivid imagination and skill of the artist.

Oleksandra Selyuchenko’s ladies attract notice with their perfection. Fussy housewives, various images of peasant women, women in hats, lively, tidy and joyful ladies, which take a chicken under the arm or in the basket, grand petty bourgeoisie, girls with bread and salt are among them. They are all different, because the artist has not copied already created things, but invented something new every time. All, what was born in her hands, is penetrated with love to nature and children.

The artist searched her characters at the favourite classical writers, first of all at the countrymen – Ivan Kotlyarevsky and Mykola Hohol, which wrote about the native land.

The potteress was always in the creative search. Common grey clay became for her an incentive to life, a source of high inspiration in her creativity.

Her ascension to the artistic Olympus began in 1949, after the All-Ukrainian Exhibition of Children’s Toys in Kyiv, where her works have got a prize-winning place. After this they travelled all over the regional, republican, international art exhibitions. The Oleksandra Selyuchenko’ works have been seen in many cities of our country as well as in Moscow, St. Petersburg, Sofia, Paris, Brussels, Tokyo, New York. They were repeatedly awarded with high rewards.

Now many works of the artist are kept in museums as well as in private collections of different countries.

The artist’s selfless labour has been awarded with the honorary title of the Honoured Folk Artist of the Ukrainian SSR. She was a member of the Artists’ Union of the USSR.

Oleksandra Selyuchenko has reached further, than her contemporaries and many predecessors – she consummated Opishne plastic art of the 20th century to the novel height. One of the deserts of Oleksandra Selyuchenko as an artist is that she has poeticized the Opishne clay, having made it to light up with sunshine, to speak the language of human feelings, to strengthen the highest human values, to provoke gladness and optimism. Because pottery craft was for her not earnings, not a living, but a possibility of self-expression, the main source of joy and beauty.

On June 23, 1987, the Opishne potteress Oleksandra Selyuchenko has passed away into another world, having become a legend of Ukrainian pottery-making.

Created just now in Opishne, The Museum of Pottery made every endeavor for the preservation of memory on the great Artist and popularization of her creative work. The Memorial Estate Museum of the Potteress Oleksandra Selyuchenko was created already next year, and that was a prominent event in the Ukrainian museology of that time. After the death of folk craftsman her yard, outhouses, including the kiln, the interior of dwelling, articles of everyday life and creative works (a big collection of ceramics, decorative painting on paper, photographs, epistolary legacy) have been preserved untouched for the first time in Ukraine.

Now 1064 Oleksandra Selyuchenko’s ceramic works and 296 leaves of decorative painting, made by her hand, are kept in the National Museum of Ukrainian Pottery in Opishne. 531 item of everyday life, which were used by Oleksandra, are exposed in the estate museum too. The pottery instruments and the equipment of the artist (sticks, rubber syringes to paint with engobes, a tournette, a muffle kiln) are kept too. A part of works was burned already after the death of the artist by the employees of the museum (on October 13-14, 1987). The Pottery Library of Ukraine has accepted her personal library, which numbers 174 issues (books, periodicals, catalogues, booklets etc.) in deposit, has prepared and published the catalogue of the Oleksandra Selyuchenko’s library and the bibliography of published works about her. The private archives: letters, diaries, memoirs (222 units of issue) and photographs (803 photos), which tell about the life and creative work of the famous artist were handed over into the funds of the National Archives of Ukrainian Pottery in Opishne. Every five years the representative Selyuchenko Scientific Readings are held in Opishne.

The Oleksandra’s commemoration is held in the estate every year on the artist’s birthday (on May 6).The visitors have a possibility to hear a story on the creative work and the course of life of the artist, to visit the Oleksandra Selyuchenko’s peasant house and familiarize themselves better with her works, and to take part in games, competitions and quizzes as well. And the master class, holding by potters, will satisfy the every visitor’s desire to make has own masterpiece.

The tradition to burn the toys of Opishne craftsmen in the Oleksandra’s kiln during annual (the last decade of July) Weeks of the National Pottery Shifting in Opishne on the territory of the estate museum, was established. All people, who is present in the estate this day, have the opportunity to see the process of burning, communicate with the elders of pottery craft, to see, how craftsmen work, to listen folk song companies, to take part in different competitions and quizzes, taste national dishes and enjoy the wonderful recreation.

Oleksandra Selyuchenko is an emblematic person for Ukrainian culture. With her original creative masterpieces she became a classic of Ukrainian pottery-making, being considered as the leader of the cohort of the world-famous artists of the pottery capital of Ukraine.