The Museum Of The Artistic Krychevsky Family 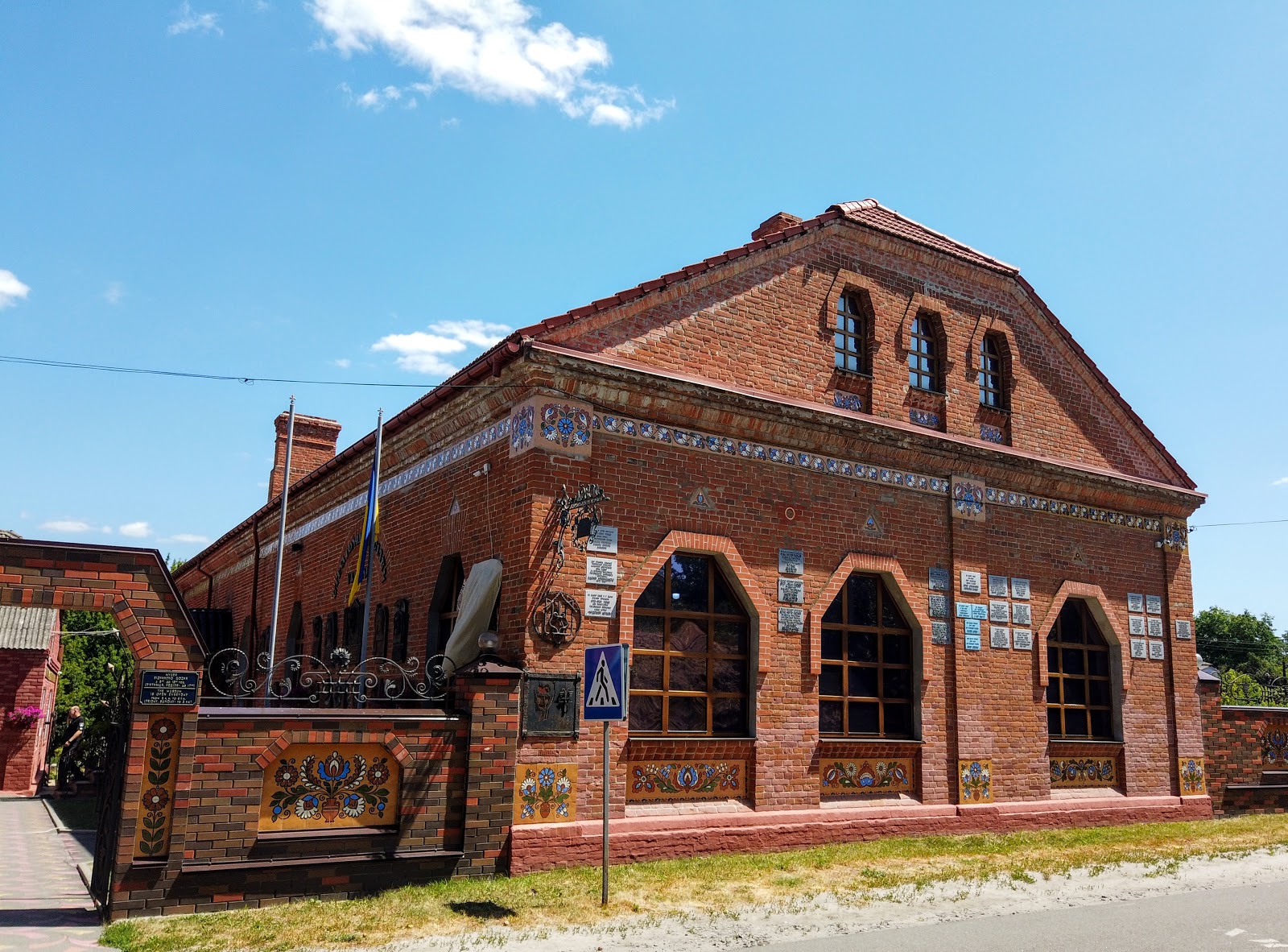 Now the most outstanding pottery building of Ukraine is the so-called «The Krychevsky-Lebishchak House», which is situated in the world-known centre of folk artistic culrure of Ukraine, the universally recognized capital of Ukrainian pottery – the town of Opishne in the Zinkiv District of the Poltava Region. The building was intended for the functioning of the Opishne Pottery Model Station of the Poltava Government Council in it.

The functioning of pottery schools, and later of the co-operative association, the «Art Ceramic» plant in this building was one of the culturological phenomena in Ukraine. It became actually the heart over hundred-year development of the pottery school education in our country.

The most famous persons of Ukrainian culture, the most outstanding creators and figures of our pottery have gone through this buiding. Their pilgrimage to the Pottery Mecca of Ukraine has transformed this facility into the object of peculiar pride, significant for the nation, a unique monument, which is the embodiment of the spiritual progress of Ukraine during all the 20th century.

In 1988, this building, erected according to Vasyl Krychevsky’s design (1914–1916), was handed over to the facilities of the National Museum of Ukrainian Pottery in Opishne.

Traditional pottery craft became an object of the peculiar admiration of Vasyl Krychevsky, a member of the Academy of Sciences. From 1902 until 1919 he repeatedly visited and lived in Opiishne, involved the Opishne potters in decoration of buildings designed by him; he owned the early 20th century’s biggest collection of the Opishne and world ceramics (destroyed in 1918). In 1914, while living in the «pottery capital» for a long time, he learnt pottery, made some ceramic works himself, and at the end of 1918 became the principal of the newly created Myrhorod Art and Industrial Institute (1918–1919). At the last time he was in Opishne in 1938.

Vasyl Krychevsky became the patriarch of the great art dynasty, which representatives have been productively working during 4 generations in the field of art. In particular:

• Brother – Fedir Hryhorovych Krychevsky (1879–1947) – a prominent Ukrainian artist and educator, a professor, a Doctor of Art History, a merited art worker of the Ukrainian Soviet Socialistic Republic, one of the founders and the first incumbent rector of the Ukrainian Academy of Arts.

• Son – Mykola Vasylovych Krychevsky (1898–1961) – a famous Ukrainian post-imressionist artist, painter, graphic artist, stage designer, a member of the Association of Independent Ukrainian Artists in Paris; since 1920 lived in the city of Paris (France), where he has taken acknowledgment.

• Granddaughter – Oksana Ivanivna Linde de Ochoa (born in 1948) – a Ukrainian and Venezuelan painter, composer, holder of the Order of Princess Olga of the 3rd grade; from her birth she lives in the city of Caracas (Venezuela).

• Grandson – Vasyl Ivanovych Linde-Krychevsky (born in 1953) – a ceramist, the master of applied art; since 1989 lives in the city of Boonville (the USA).

• Great granddaughter – Blanca Myroslava Linde Duncan (born in 1976) – painter, designer; since 1989 lives in the city of Boonville (the USA).

Now few people remember, that for the more than half century (the late 1940s – the early 1980s) the Vasyl Hryhorovych Krychevsky’s name was deleted from the pottery and cultural history of Ukraine. The Soviet rule did all the possible to make the country forget its most eminent champion of artistic progress of the Ukrainians of the 20th century. The revival of the memory about the Artist began in Opishne after the foundation of the Museum of Pottery in 1986.

In 2009, his grandson Vasyl Linde-Krychevsky, a citizen of Venezuela, and a USA resident at that time, arrived to Opishne for the first time. In 2010, he came back to Opishne, but already for a month and not alone, but with his son – Vasyl as well. The same year, Vasyls were proposed to create an exposition, devoted to Vasyl Hryhorovych Krychevsky in the Government Council house. So the idea to found a scientific centre to study the artictic heritage of two famous Ukrainian families – the Krychevskys and the Shcherbakivskys – in Opishne was born and made more concrete and conceptual during this yearly communication (the author of the ideas and the conception – the director of the Ceramology Institute – the branch of the Ethnology Institute of the National Academy of Sciences of Ukraine, the vice-chairman of the Board of the Guardians of the National Museum of Ukrainian Pottery in Opishne, Doctor of History, Professor Oles Poshyvailo).

In 2011, Vasyls Krychevskys arrived again to Opishne. They brought the Krychevskys’ archives, connected with families of the Krychevskys and the Shcherbakivskys, from the USA. They contain correspondence, legal documents, family photographs, works by Vasyl Hryhorovych Krychevsky and other artists of the family (418 units of issue altogether). All this treasure was presented to the Museum. Vasyl Linde-Krychavsky continues his searches, aimed to the concentration of the creative heritage of the glorious Ukrainian kins in Opishne. A bronze memorial plaque for Vasyl Krychevsky by Vasyl Yarych, the Folk Artist of Ukraine, the Honoured Art Worker of Ukraine, a sculptor (Lviv) was opened on «The Krychevsky-Lebishchak House» in the same year.

In 2012, the 3rd INYERSymposium of Art Ceramics in Opishne 2012: 12х12 was held with the participation of art ceramists from Belarus, Spain, Moldova, Poland, Russia, and Ukraine. The usage of Vasyl Hryhorovych Krychevsky’s ornamental motifs in the modern monumental and landscape sculpture became the leading topic of the symposium. A documentary film The Vasyl Krychevsky’s Third Dimension was created by the efforts of the Charitable Foundation «GIFT».

Graphic works and paintings by Vasyl Hryhorovych Krychevsky, watercolours by Vasyl Vasylovych Krychevsky, Kateryna KrychevskaRosandich, Oksana Linde de Ochoa, paintings and weaving by Halyna Krychevska-Linde, painting by Blanca Myroslava Linde Duncan; the unique archivalias (manuscripts, photographs), which elucidate the intricate collisions of the family members’ life, are exposed in the Museum of the Artistic Krychevsky Family. The separate hall is devoted to the main Vasyl Krychevsky’s ardour – folk art. The exposition resembles the interior of the artist’s flat in the Mykhaylo Hrushevsky House: it is full of unique ceramics (particularly the Opishne one in the style art nouveau of the early 20th century), carving, weaving, embroidery, folk clothes, concordant with the composition of his collection. The special exhibition of literature elucidates the course of life and the creative development of the artistic Krychevsky family.

The Ukrainian diaspora in different countries of the world joins actively to the development of the Museum of the Artistic Krychevsky Family as a manifestation of the return of national figure, their spiritual and artistic heritage to Ukraine. The collections of diaspora publications, given as present by Association of the Ukrainians of New Zealand and the Library of Ukrainian Orthodox Church in the USA, are exposed, in particular. They are dated with 1945–the 1950s – the last period of Vasyl Krychevsky’s life, and reflect objectively the social and political aspirations of the Ukrainians outside the Fatherland, ethnic surroundings of the Krychevskys. This rare literature will help the researchers of the creative work of the Krychevskys’ as well as all the visitors of the Museum to cognize better thoughts and feelings of forced emigrants, which dreamed about the Independent Ukraine and the near return to native estates.

The WALL OF POTTERY GLORY of Ukraine was opened on the building on June 30, 2011. It serves as a distinctive reference point and a reminder, a tuning fork, a standard for validity check of the national and cultural revival. This is not the Wailing Wall, but the Wall of glory, pride, national grandeur. This is the place to commemorate past glory and to dream about the Future! The place of pottery, ceramological, and cultural pilgrimage of the Ukrainians. The wall as the place for images, the altar of national heroes and pottery devotees.

It is prominent through its bronze memorial plaques dedicated to famous creators and figures of the Ukrainian culture, which assisted and helped potters, tried to glorify them in the world, collected their works, encouraged their creative work. Also special prominence is attached to the memorial plaques of the most outstanding Ukrainian pottery figures, involved in the activities of training pottery workshops in Opishne, in creation of the world brand, named – «OPISHNE CERAMICS».